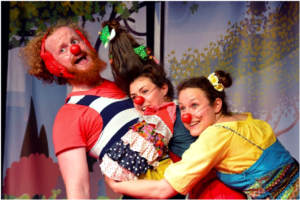 In the run up to announcing the winner of the main SIT-UP Award later this week, we are pleased to announce that the winner of the separate £1,000 Outstanding Audience Engagement Award is Acá Theatre’s production, Better Together at the Pleasance Courtyard.

This physical theatre company has been given the award for engaging with its audience in an innovative and hugely entertaining way. Better Together looks at how people communicate with each other and the increasing use of technology. To get their message across the company, started an online campaign entitled ‘peoplenotscreens‘ with badges handed out to audiences as well as providing a sheet with tips for a more screen-free day. During the Edinburgh Festival Fringe run, Acá Theatre also ran workshops at Edinburgh’s Whale Arts Centre, Westerhailes and Mix Up Theatre.

Acá Theatre’s Joint Artistic Directors, Francisca Stangel, Avi Simmons, and Nick Eastburn, said: ‘We are passionate about making theatre that transcends the performance space and we believe that theatre should engage with audiences beyond the performance itself. The clown show Better Together makes audiences laugh together and inspires us to overcome the digital distractions that surround us and to play, imagine, and connect with each other in order to combat child loneliness.’

The shortlist for the main SIT-UP Award was announced at the end of last week with the winner to be announced before the end of the Festival.

A quarter of all theatre productions at the Edinburgh Festival Fringe look at serious social issues and there is a large percentage of the audience that are going to these shows not just to be entertained but with a real thirst to be better informed on the issues as well as a desire for greater engagement.

David Graham, founder of SIT-UP said: “Plays are very powerful in changing the attitudes of audiences but regrettably most productions do little beyond the performance. The actual audience engagement for many theatre companies is an afterthought and most do not provide post show conversations, signposting towards further information or potential fundraising opportunities for the appropriate charity. The SIT-UP Awards were set up to change this.”

SIT-UP surveyed and interviewed 190 audience members at eight plays across a range of issues including race, mental health and drug addiction.

As one audience member commented

“It seems to me that Fringe audiences are those who deliberately seek out hard hitting drama because they want to be stimulated, challenged and confronted, and these are the very people who would welcome a deeper engagement with the play.”

David Graham added: “There are some wonderful examples of companies trying to do more than just put on a play but few do it well or pay little more than lip service to audience engagement. Surprisingly, many of the companies from abroad seem to do it better than UK ones”.

As Mehr Mansuri from Henry Box Brown said: “The social action engagement with our audiences is not a thing apart or after-thought, but at the very centre of our artistic and programmatic vision.”

Productions commended by the judges for this award include:

Hoipolloi’s The Duke created by Shôn Dale-Jones. This production has raised nearly £50,000 for Save the Children over the past few years and has returned to this year’s Edinburgh Festival Fringe.

Henry Box Brown, a musical journey about an 1850s Virginia slave who ships himself to freedom in a box.The company invite audience members to sign up to a social pledge about race.

Adam Lazarus’s Daughter, a head-on confrontation of toxic masculinity. The company holds an excellent daily post-show discussion with audiences in the café at the venue.