In this article I will look at some of the things we noticed, and learned, at this year’s Edinburgh Fringe when it comes to Audience Engagement and Audience Impact. Not all was bad, but little was what might be described as ‘excellent’, so I will also comment here on what we felt could have been done better – often with little additional effort.

Well, you can’t always rely on the title, the synopsis or the genre to give you a clue as to what the show is going to tell you! So, with over 3,000 shows of which over 1,000 can be described as “theatre” how do people choose? Generally, the published Fringe Programme, The Fringe app/website, fliers picked up during the week and word of mouth, often while queuing for a show! Some of the major venues such as Summerhall, Gilded Balloon, Udderbelly and Assembly, also produce their own programmes but for those travelling to the festival it is the main Fringe programme and the app/website that dominate. 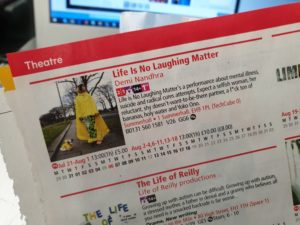 The printed programme is large and comprehensive, thousands are printed and distributed and you see people everywhere referring to it. The image to the right is a quick sample of an entry for a show I saw this year and thought was excellent; the main threads were depression and suicide, the experiences of the actor herself so very personal and very affecting for the audience. The programme contains a number of flags; age appropriateness, 2-4-1- tickets, premiere, etc. Nothing on its actual issues, no clues as to its actual themes and content. Fortunately, this actor described her shows as “always relaxed, leave any time” and some did, finding her honesty too much to hear.

The same show on the app/website (image left) does contain a Warnings and Additional Info section that states “Contains Distressing Themes, Strong Language/Swearing” and mentions that a dog appears on stage. This is helpful (well, except the dog info) though we would argue that “Distressing Themes” is too broad a category, what are these themes; rape, suicide, grief, animal cruelty, domestic violence?

Neither the programme nor the app/website have any indications of what you might do with this information in terms of follow-up or support. We would argue that the information should be available in both places and could use a similar icon style to those already used to indicate, at least broadly, the areas touched on, with some information in the front of the programme where the other icons are described – even if it just details numbers for the Samaritans and other pastoral care providers in the area.

Going to a Show 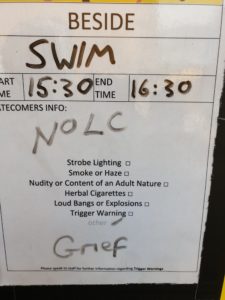 So you have chosen a show and you head off for it – what next?

I spotted this at the door of one of the Pleasance Courtyard spaces, I had been there several times before I noticed it, but on checking found them beside the doors of all the spaces there. Talking to others in the queue, it seemed that I was not the only one to have missed it.

This is a great idea, really helpful, all I would say is that, particularly at Pleasance Courtyard,  you are often queuing away from the door, when you reach the door you are busy having tickets checked and getting inside, especially if it is raining, and these things add up to not spotting the sign – arguably it is also a bit late as you have bought your ticket and queued to get in, now you are just about to step through the door and you see this? Perhaps this could be duplicated at the “Queue Here” sign?

Many shows do not provide any form of “programme”, of those that do it is normally an A4 or A5 sheet, often printed one side, with details of the company, cast, crew and creatives and a more detailed synopsis. Social media links will usually be included and there may even be a photo or two. A very few shows provide a real programme, glossy and multi-paged.

When it comes to social impact theatre, the minimum one would hope to see in a programme is some kind of call to action and/or details of support organisations. Some productions had reached out to charities but often there was little response and not enough effort to pursue it. We also reached out to try and broker some relationships with limited response. We think that traditionally, theatre is not seen as a strong area by charities but we feel there is a terrible missed opportunity to use theatre to tell stories and to move audiences to contribute and become involved.

At the end of the show

At the end of most shows, one of the actors will speak to the audience – normally to remind you to review, and that word of mouth is really important for getting them an audience.  If the audience has been deeply affected by the show, either driven to want to do something or touched emotionally, then something more is required.

Things we have seen and liked this year include 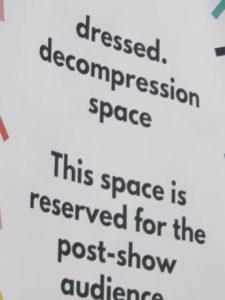 We were disappointed by how few Q&A and Meet the Cast opportunities were provided this year. One show, “Dressed” did get a space reserved at the Pleasance Courtyard but others were more ad hoc. We believe that venues providing a fixed, and signposted, place where post-show interactions can take place would be beneficial to improving engagement. Such interactions may be just between audience members, between them and a moderator, say from a charity, or between them and the cast or creatives of the production. This would not be a simple matter to organise but within the scheme of the whole Fringe it would be a small extra load.

One company we approached said that they normally did do Q&A but not at Edinburgh Fringe as “it is a middle class audience”. An odd response as it is the very audience who perhaps could achieve something!

As mentioned in a previous article, The Salvation Army, and volunteers from across their organisation, did provide a quiet space in the building opposite the Pleasance Courtyard so that performers could “unwind” or find someone to talk to – such pastoral care is valuable and it deserved to be better known as is the fact that the University GP practice can offer help. In an article by Emma O’Brien in The Skinny, Juliette Burton notes that Fringe Central and Equity are also taking a real interest in artist’s wellbeing but that a big issue is making sure artists know that these support mechanisms exist.

Pre-show information: More explicit and easily understood information on triggers in each production.

Post-show engagement: More effort to harness the audience’s involvement in the production to change behaviours, practices and opinions or to engage with charities and organisations that do.

Post-show support: Provision of information and support to assist audience members affected by the issues raised.

Charity integration: Better understanding from charities, and productions, on the mutual benefits that could come from co-operating on social impact theatre

This discussion has been about the Edinburgh Festival Fringe 2019, however, many of the comments about finding support when choosing and attending a show apply equally to  all theatre. We will speak to this in the next article.

One of our goals this year is to talk to organisations across the theatre and other sectors to try and identify best practices which we can feed forward to companies in the future.